Frank talks about his relationship with Ryan Thorell and
Thorell Guitars in the Acoustic Magazine interview below. 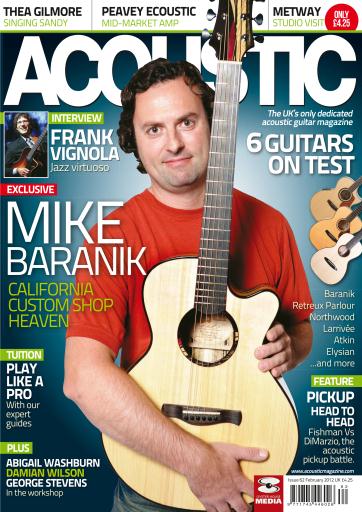 "Getting to talk with a musician whose work you totally admire can be a tricky business. What if they are nothing like as appealing in person as they are on record?

With Frank Vignola, it’s never going to be a problem. Chatting in his home in upstate New York, Frank is every bit as warm and welcoming as his stunning guitar work onstage and on record. He gives expansive answers delivered with a sense of humor and style, and is always keen to ensure that those around him get some of the credit for his success – including Ryan Thorell, who built the main guitar in Frank’s collection.

Frank believes that Ryan is a future master luthier and explains how he came to enjoy his current guitar of choice. ‘I’ve known Ryan Thorell for along time, and he sent me a guitar which he was working on. It has a carved top and it’s like a hybrid between a Gypsy guitar and an archtop. It’s all mahogany, apart from the top which is Adirondack spruce, which is the spruce that the old Gibson guitars are made from, before they switched to European spruces. It has a really warm sound, and I tried it out and within two minutes I fell in love with it, and I told Ryan I would be delighted to endorse this guitar. This guitar travels really well, and I travel a lot, so when I take it out of its case, nothing is too far out of tune. It’s a guitar that will stand up to the traveling I do, and being played every day. Every guitar player should play every day, even if it’s just strumming a few chords, or walking past the guitar on its stand and just hitting the strings; you should play every day.’

All master guitarists have a favorite guitar that is their default choice, but they all have other instruments that deserve regular attention, and Frank is no exception to that rule, as he confirms. ‘I have three archtops. One is a 7-string which Bucky Pizzarelli gave to me; it’s the original one that he started out on. I have a Benedetto signature model, and I have the Thorell. I also have an old Martin Flat Top 00-17. That’s really nice, and I have a classical guitar made by Gary Zimnicki from Michigan, and I have a Bacon and Day tenor banjo which I love. I’ve had a lot of guitars in my life, and in retrospect I wish I had held on to all of them, but I do have what I need. Ryan is making me two new flat-tops; one is going to be constructed entirely out of mahogany, like the old Martin 00-17s, and he is making another one out of American Douglas fir, which he says gives a wonderful warm sound. I love the flat-top sound and I am looking forward to putting that sound into my shows."