As Good as it gets! 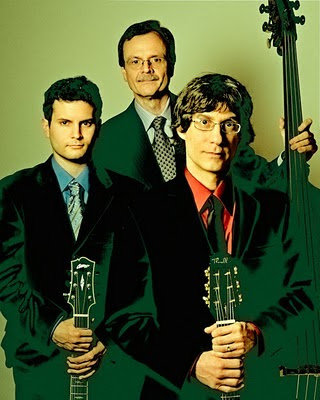 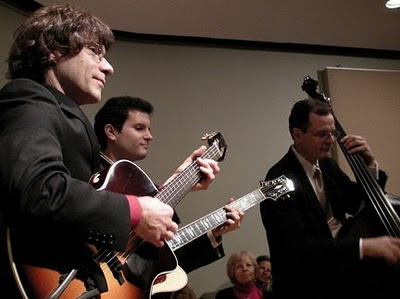 January 18, 2010 - Videos and Pictures of the Frank Vignola Trio at the Minstrel in Morristown, New Jersey:  http://www.nj.com/morristown/index.ssf/2010/01/video_on_stage_with_guitar_god.html
http://www.youtube.com/watch?v=CweKujyC-9s 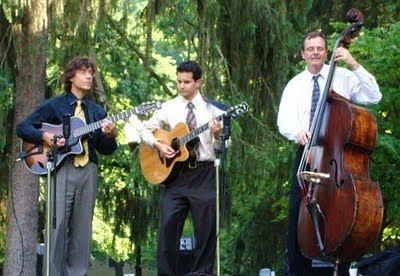 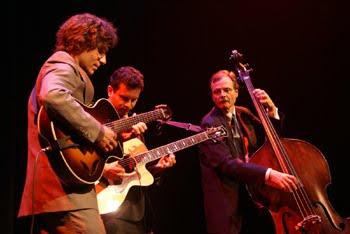 Frank Vignola shatters the barriers between popular music and traditional jazz to create a powerful acoustic string music experience. Their amazing virtuosity mixes high-energy original material with unique renditions of contemporary tunes. The result - a smokin' blend of contemporary acoustic rock, gypsy jazz, bluegrass, swing, and blues. "It's not jazz as we know jazz here in America." - Les Paul, on naming Vignola to his 'Five Most Admired Guitarists' list for The Wall Street Journal news

Frank Vignola Trio plays "Flight of the Bumblebee" in 92 seconds at the 2009 Soave Guitar Festival in Italy. (Frank is playing his Thorell "FV" Guitar): http://www.youtube.com/watch?v=wv01FITXHec 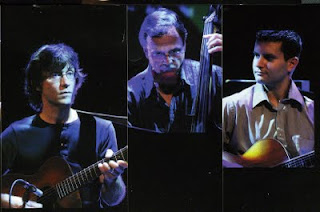 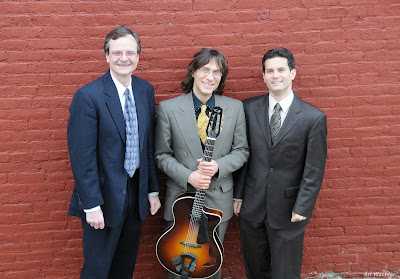 Frank Vignola - plays a Thorell "FV" Guitar (click picture to enlarge)
Frank is one of the most accomplished, multi-dimensional players walking the planet today. Monster player, composer and improviser, Frank plays proficiently in every genre, from jazz to bluegrass, and works with everyone and their brother. Frank’s pedigree is a mile long, but a quick Google will illustrate why he is considered one of the best on the planet. Whether he is featured on a Donald Fagen recording, a jam with David Grisman, as Les Paul's right hand man or leading his own groups throughout the years, he has proved himself to be in the elite creating his own unique sound.
“Frank Vignola is the perfect guitarist really. He knows every chord under the sun, he can drive the rhythm so hard that you really don’t need any more of a rhythm section practically for anything. And then when he begins his solos, one knows immediately that the music making is on the highest plane….Frank is a soloist to the very extreme limits that you would assume a soloist could ever be, a genuine virtuoso.” ~Mark O’Connor
“Guitar virtuosity at its highest level-- a must hear.” ~djangoblog.com
“…the monstrous Frank Vignola….is one of the most vicious tremolo-pickers on the scene.” ~Jude Gold, Associate Editor, Guitar Player Magazine

Vinny Raniolo - recently purchased a Thorell "FV" Guitar
Starting to play the guitar at age 13, Vinny Raniolo quickly developed his hands and ears for music and began playing locally in New York. He has performed in pop and rock bands in the Radio Disney circuit touring the country, and has played funk and jazz, touring the Virgin Islands and Europe.
Vinny has also had the opportunity to play with guitar legends such as, Bucky Pizzarelli and Gene Bertoncini and play on many albums with great musicians and artists including Frank Vignola, Fareed Haque, and world famous comedian Jackie Martling. Never afraid of a new musical situation Vinny is continually pushing the boundaries of his guitar playing.
Now at the age of 23, Vinny Raniolo is a hot, hot player, and an integral part of Frank Vignola's Band.

Gary Mazzaroppi - Bassist
Gary is the finest bassist on the scene today. He has performed and recorded with every major jazz guitarist including, Les Paul, Tal Farlow, Barney Kessell and a bunch of others that no one has ever heard of. His soloing and solid accompaniment is an important part of the Frank Vignola sound. As Frank puts it, " Gary makes me sound 10 times better than I actually am. The true art of accompaniment."

Final Picture of a Frank Vignola Trio performance that I couldn't pass up: http://www.nj.com/morristown/index.ssf/2008/08/one_bass_player_who_really_get.html