Don’t miss this concert! A perfect blend of jazz and blues performed by the legendary Robben Ford and his Quintet. The JazzSLC concert series is now in its twentieth year. (http://jazzslc.com/) Their goal is to continue to provide live jazz at a world class level. 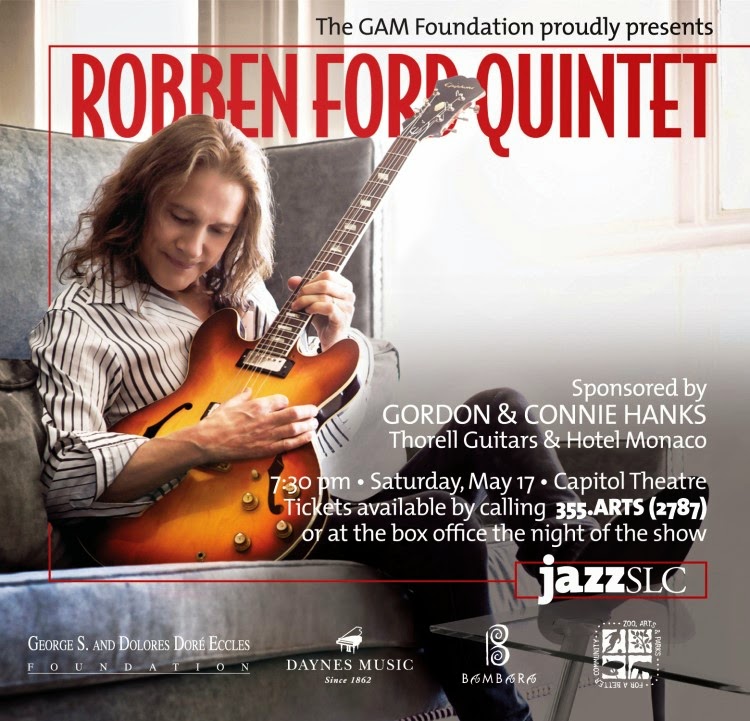 Thorell Guitars on display in the lobby
Robben Ford Bio:
Robben Ford is one of the premier electric guitarists today, particularly known for his blues and jazz playing. A five-time Grammy nominee, he has played with artists as diverse as Joni Mitchell, Miles Davis, George Harrison,  Bonnie Raitt, Michael McDonald, Bob Dylan, John Mayall, Greg Allman, John Scofield, Larry Carlton, Brad Paisley, and many others.
Robben’s first chosen instrument was the saxophone, which he began to play at age ten. He began to teach himself guitar at age thirteen. Ford frequented the Fillmore and Winterland auditoriums in San Francisco to see Jimi Hendrix, Eric Clapton, Cream, Led Zeppelin, Albert King, B.B. King and all of the progenitors of blues. “It was an incredible time for electric guitar,” Robben recalls.
On his interest in jazz, Robben says,” I fell in love with the sax-playing of Paul Desmond and The Dave Brubeck Quartet, and before long found Ornette Coleman, Archie Shepp, Yusef Lateef, Roland Kirk, John Coltrane, Wayne Shorter, and of course, Miles Davis.” These influences have stayed with Robben, playing a large part in his particular blend of jazz and blues that define him as a guitarist and allow him to play in a wide variety of settings.